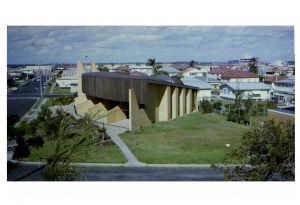 This symposium seeks to investigate the connection between religious architectural and urban design and community formation.

Post-war Australia experienced massive population growth, which was accompanied by a religious building-boom. In this period, Australia’s various denominations played a key role in the country’s urban and suburban development, alongside government and secular actors. The proliferation of religious buildings prompted a re-evaluation of the role of the religion in society, and heralded a phase of experimentation in the urban and architectural design of religious buildings.

We seek contributions that address (but need not be limited) to one or more of the following themes:

Papers are sought which explore these themes primarily in the Australian post-war context. However, submissions from further afield that can shed new light on developments in Australia will also be considered. We particularly call for papers that not only consider the architectural design of individual buildings but also their urban setting, denominations’ regional spread; the positioning of buildings within the same denomination and positioning of buildings in relation to neighbouring/competing denominations; the positioning of spaces of worship in relation to other religiously-funded building, such as convents, seminaries, schools, kindergartens, hospitals, social and charity buildings, etc.

Abstracts of no more than 300 words should be submitted to l.daunt@uqconnect.edu.au

Submissions can either be for 20-minute full papers, or for 10-minute lighting talks.

Wednesday 15 August 2018      Circulation of papers to the scientific committee, respondents, and presenters

On Thursday 23 August 2018, we will organise a post-war religious building tour in Melbourne.

A small fee will be charged for participation in the symposium, as well as a (separate) charge for those wanting to participate in the building tour. More information on registration will be announced shortly on the websites of ATCH and ACAHUCH.