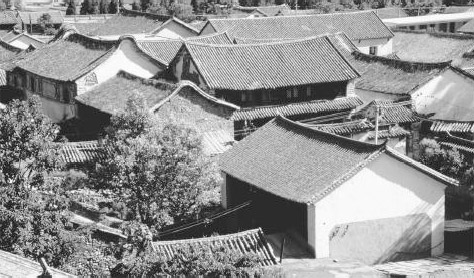 Please download the PDFs and bring them with you to the conference.

Three representative wards are selected for digital reconstruction. Beyond the general structure of the road networks, all three wards are subdivided into smaller land plots according to the estimated population density of the size group they belong to. These wards are then populated with compounds of different types and sizes depending on their owners’ social status found in historical records.

Built in1586 on the ruined site of Karakorum, the old capital of Mongol Empire, Erdene Zuu monastery was the first Tibetan Buddhist temple in northern Mongol. Based on the spatial format of both the exterior and interior design and the Yuan inscriptions, the author discusses the uniqueness of Erdene Zuu. Through comparison, the paper reveals the tradition of Buddhist architecture of Karakorum remained influential in the sixteenth century. IMAGE PDF

The West Chahua Tower of Chong’an Temple in Lingchuan, Shanxi, is multistoried pavilion type, dated back to the Yuan dynasty. This paper tries to analyze and evaluate the structure, the timber construction, and the evolution of the appearance of the unique West Chahua Tower by ways of architectural mapping and survey, interpretation and analysis of inscriptions on tablets, and studies of documents.

Basing on the recordation of the Book of Gyeonghoeru Pavilion written by Jeong Haksun, the governor of the rebuilding project of the pavilion in late period of Joseon, the form of the new Gyeonghoeru pavilion implied a completed symbolic system, which resembled the Mingtang building of ancient China. The author considered that from a pavilion for entertaining the Ming China ambassador to a building with some ritual function, the transformation of Gyeonghoeru concerned with the feudal system of Ming and Qing China.

In 667, Shi Daoxuan established a precept platform for ordination ceremony in Jingye Temple in the south of Chang’an. He wrote an article named Jietantujing (Illustration for the Precept Platform Creating in Guanzhong) in which he introduced the origin, foundation, meaning and deducing process of architectural scale of this creation. In a sense of architecture, he brought us a typical example of design in ancient China. So here is a preliminary architectural study about the precept platform and Qishuyuan of Master Daoxuan.

This paper discusses types and function of architectural terracottas in the Warring States period with particular reference to the Qin roof tiles. The intention is to raise questions emerged from observations and discuss problems. The principle method of the study is comparison within the materials and cross-referencing relevant materials. This study is presented as a first step in the process of undersanding roof tiles in the early historical period.

Four monasteries were described as the Four Exquisites under Heaven by Tang dynasty prime minister and geographer Li Jifu (758-814) in his writing ‘Shi Dao tu’. The work is now lost but the description of the Four Exquisites had been used in many literature on these four monasteries. While the reason why these four monasteries were picked as a group, it is not difficult to see the various narrations of the Four Exquisites by subsequent authors. This paper will present aesthetic idea and architecture narration of traditional China and will explore the interface of text and imagery. It will also look at the monastery as a living organism within the historical development, thus meaning changed throughout the time.

Ernst Boerschmann’s research in Chinese architecture began in 1902 and ended with his death in 1949. He also advocated the preservation of ancient monuments in China. 1933 - 1935, Ernst met twice with Liang Sicheng and Zhu Qiqian. His best connection was with Teng Gu, a Nanjing-based art historian with a doctoral degree from Berlin University. In 1934, Boerschmann contributed to establishing a working group for monument preservation in China, worked on two proposals: Sarira Pagoda in Xi’an and tomb of Xiao Xiu in Nanjing.