The first comprehensive reference text to be published on Australian architecture. Unique in its breadth and depth, and revealing new knowledge on architects, their buildings and the ways they designed and built them.

The Encyclopedia of Australian Architecture was published in October 2011 by Cambridge University Press. University of Melbourne Professors, Philip Goad and Julie Willis compiled and edited the publication, which is the first comprehensive reference text on Australian architecture. The editors brought together leading Australian scholars, academics, historians, heritage professionals and practicing architects to research and write the entries.

From Aboriginal architecture to zoological gardens, from Art Nouveau to Brutalism, the encyclopaedia is unique in its breadth and depth and reveals substantial amounts of new knowledge on architects, their buildings and the ways in which they designed and built them in Australia. Across 1000 entries from 225 contributors and 500 photographs and drawings, the encyclopedia dissects building typologies, such as fire stations and hospitals and landmark buildings, like the Sydney Opera House. The encyclopedia also includes entries on building services, techniques and materials, as well as entries on allied professions such as engineering, building and planning. These enable a holistic understanding of the built environment that has shaped the world in which we live.

After more than five years in gestation, the project was finally completed. The Faculty of Architecture, Building and Planning celebrates this wonderful achievement of two of its finest scholars and revels in the level of understanding and appreciation that this mammoth project brings to the built industry.

The encyclopedia was generously supported by philanthropic donors. Financial support from Peter Lovell and Kai Chen of Lovell Chen Pty Ltd Foundation and Lorenzo Grollo of the Grollo Foundation and Equiset was a primary enabler of the project, which gave it important momentum.

According to Professor Willis, “The support came at a critical moment, early on in the project, which helped give it purpose and, most importantly, the investment signalled a belief that such an idea could and should come to fruition. The result of their vision and belief in the importance of the Encyclopaedia will be a legacy that will inform understanding of the Australian built environment for decades to come."

The Encyclopedia of Australian Architecture is available to purchase at Cambridge University Press. 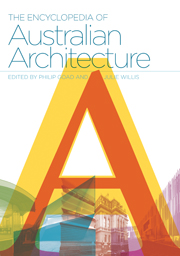