When a handmade brick was formed, the clay was very soft and you had to take it out very carefully and put it on the ground to get hard before you could move it any further. So they laid out one by one on the ground in the brickmaker's yard. Then when they're a little bit harder, they stack them up with air passing between them to let them dry out even further before they can be put in the kiln. You have to A: get the brick hard B: get the loose water out of it and then you can finally bake it in the kiln. So you have to get the water off by steaming it off, before you raise the brick to full temperature. 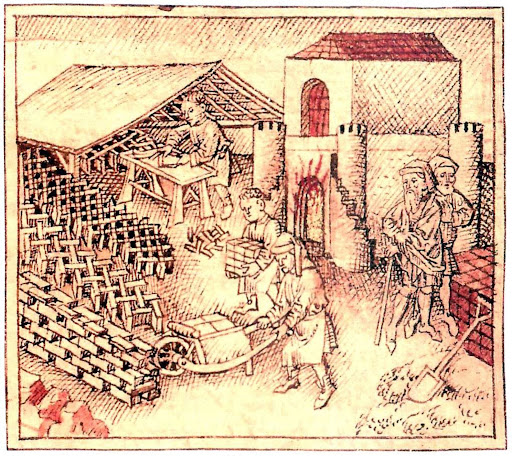 When the bricks are hacked in the yard, that’s when they're stacked with the air space between them, often they're not quite hard enough and you get little markings between the bricks where they've been overlapping with the spacers.

Now, to burn it, at first they will often be burnt in clamps, the clamp is not a kiln at all, it's just a pile of bricks which has fuel mixed in: coke material mixed into it and sealed on the other side with all bricks and mud. Allowed to burn for maybe a week and even in london bricks were being made in this way, it wasn't a primitive colonial system. Sometimes they even mixed into the clay itself some of the fuel so you find bits of carbon in the brick that's to help get the burning going straight right through the clamp evenly. It's hard to see here but this brick has little bits of embers in it from that burning process. 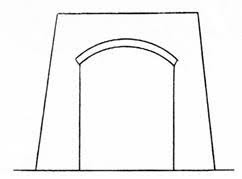 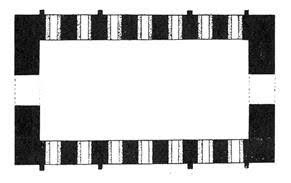 The next phase was to have a kiln which had just size no top, and again you stacked all the bricks in with the fuel, then you sealed the top with mud and old bricks and other material and finally you have fully constructed brick kilns; and they get very hot.

Now the later pressed bricks weren't soft like the handmade ones. Often you could press them hard enough to put them straight into the kiln without that long process of drying on the yard, hacking, steaming and so on.

So you get a very sophisticated hard brick to unload the bricks from these hot kilns, they stayed hot for a long time the brick makers might have something like this object here: this is a brick maker’s sandal. Which he would wear so that he wouldn't burn his feet in the kiln, this came from the Canberra Brickworks is early 20th century in date. It has leather straps but the wood is hinged so that has a sort of the toe part can rise up on this leather little hinge.

2: Brick & tile kiln, from a 15th-century Dutch bible, showing bricks in hack at the left: Graves, Tiles and Tilework, p 26.

3: Long section showing layers of fuel; pattern of setting bricks in a clamp, on either side of a livehole. Edward Dobson, A Rudimentary Treatise on the Manufacture of  Bricks and Tiles (2 vols, John Weale, London 1850), 2, pp 27, 29.