Professor Lewis describes the different types of metal ties and bricks used for joining walls through the cavity space.

In a solid brick wall, traditionally in a major building, you might have three or four thicknesses of brick in a wall. They were regarded as being waterproof in traditional British construction, In Australia as walls became lighter and lighter, with fewer and fewer thicknesses of brick in the wall and the problem of damp coming through became more acute. They began to make walls partly hollow, they would lay the bricks in a way in which there were gaps inside the walls, sent ventilation through the wall to let it dry out. But even then any link across the wall might bring water in from the outside face. So they began to make quite separate walls, two separate walls with something to structurally join them together, and that's what we're seeing when you look at some of these examples here. First of all, they had forms of brick that would join them together, which I'm not showing you here then they had forms of metal. 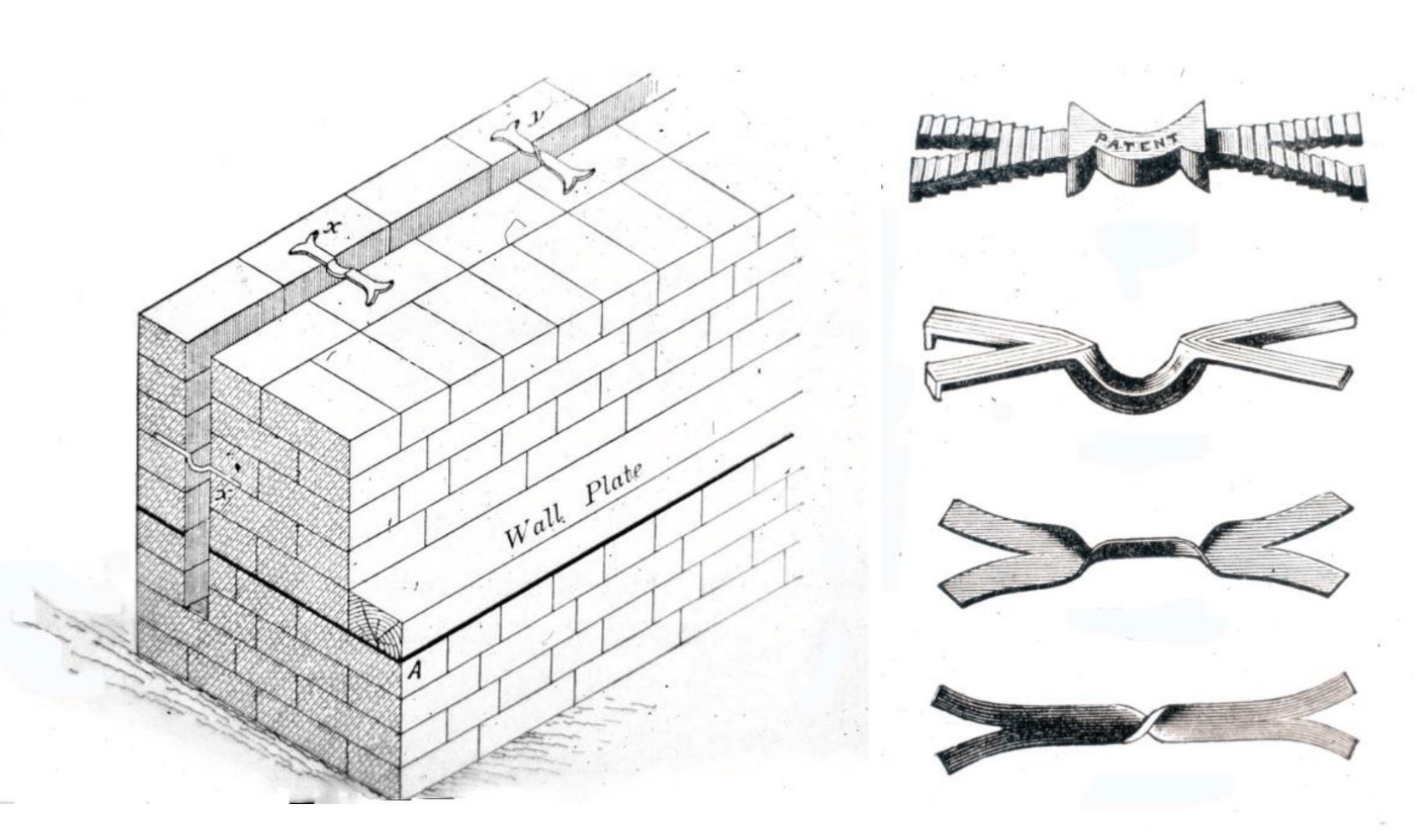 Now, this was a metal tie, would have been flatter than shown here and the two sides would be in the brick wall on either side and this piece across the middle would go across the gap and we have a little bend in the bottom, a little drip to let the water settle there and then drip off down into the wall cavity. So this material is hoop iron which could rust and it will often be either sanded, dipped in tar and then dipped in sand which is helped to preserve it or later on galvanized with a zinc coating. Now apart from having a single tie like this you might have a thing like a ladder, this is the remains of one.

The long piece of iron would go along one of the walls and the other side of the bed a parallel on the other wall and they'd be tied together by a piece of hoop iron across the middle, so this ladder-like structure would go right around the walls. Later those were replaced by wire ties and this is an example, this is galvanized wire, an American invention, the Morse tie.

Just a piece of galvanized wire turned around like that so one side goes into one wall one the other and later on they would also have a little bend in the middle of them so water wouldn't go straight across the wire but would go down the bend and then drip into the cavity of the wall.

So, bricks were devised which would tie across the wall so that the moisture couldn't pass across and T. H. Jennings was the English patentee who made these bricks in two shapes: one of which was like this and designed so the water couldn't rise up the slope from the outer face of the wall. So in this case you'll be looking at the outer wall being the low end and the inner wall being the high end, so any water that came in from this side couldn't rise up the slope and go to the inside. This is a British patent and there would normally be extruded bricks in Britain.