Professor Miles Lewis outlines the ethical considerations that must be followed under the Burra Charter to avoid compromising the heritage value of a building.

The first question that arises is the ethics of taking materials out of buildings. Now of course, in many cases, these have been found from demolition sites, so there's no issue involved in that, but if you are professionally investigating an old building you have to think very carefully about destroying a part of the fabric.

Most people are very reluctant to do that but in fact, you may be obliged to under the Burra Charter. Of course, you're discouraged from destroying the fabric, but if you are engaged to do research into a building nobody else is going to do it afterwards, you must do whatever is necessary to find out about it. If you take a piece of the fabric out you should be able to put it back again. Or if you can't put it back again you should replace it with something modern so there won't be any confusion. The worst thing that can happen is somebody restores a cottage, say and puts new weatherboards on using some sort of oldish looking nails and I come to investigate the building in 20 years time and think they are the original nails, I get to be totally misled, so you use modern building conspicuous materials in that sort of situation and when you're sampling you try to find locations where you might get the original, so if you're looking for a nail you don't look the nearest nail in the study, look for a structural joint where you can be pretty sure that the nail is the original one in its original place. 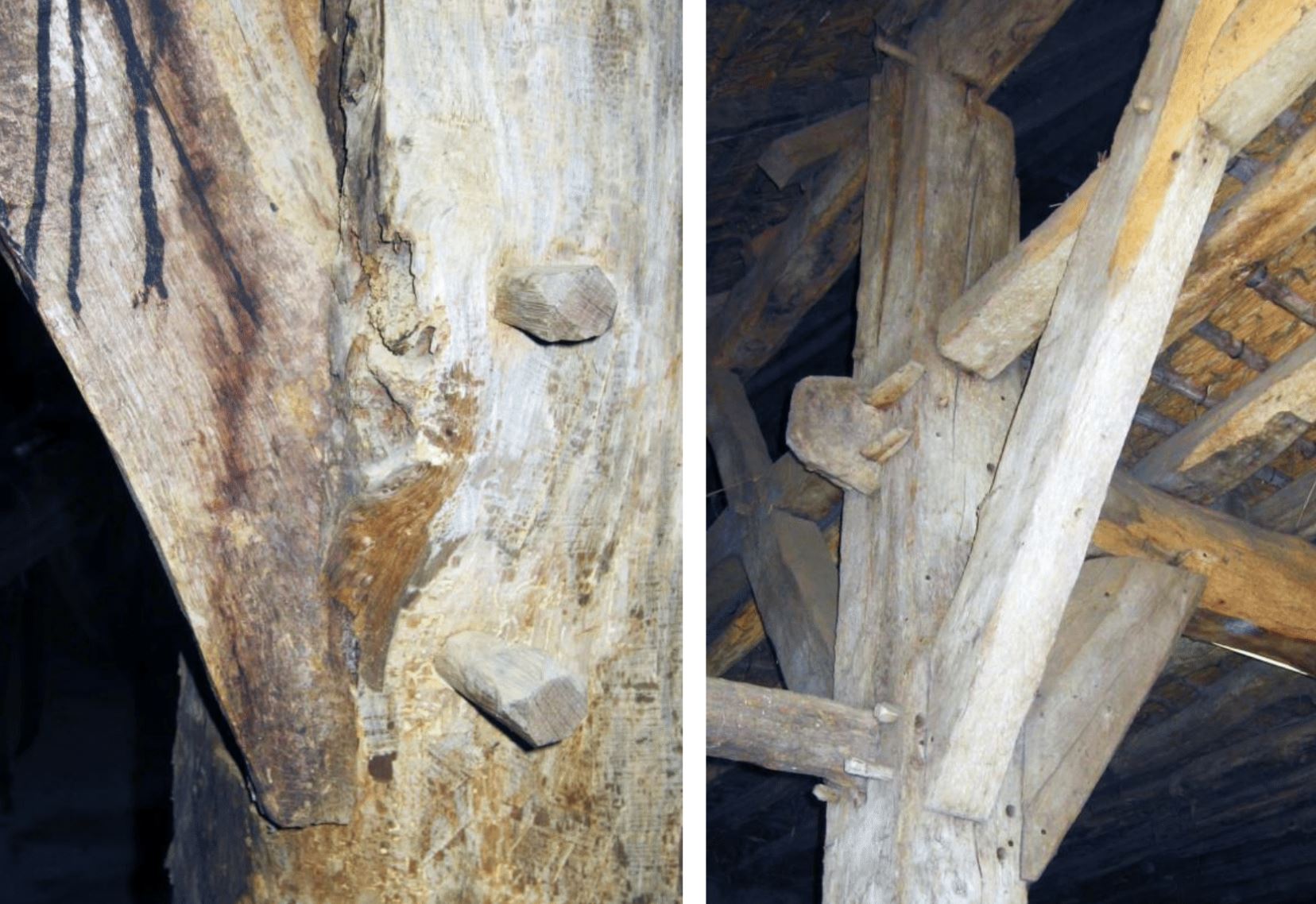 When you get this bit of material into your hands, you may just by looking at it be able to tell from the technique of manufacture whether it's old or where it's likely to have come from, but there are many other clues that can be found. 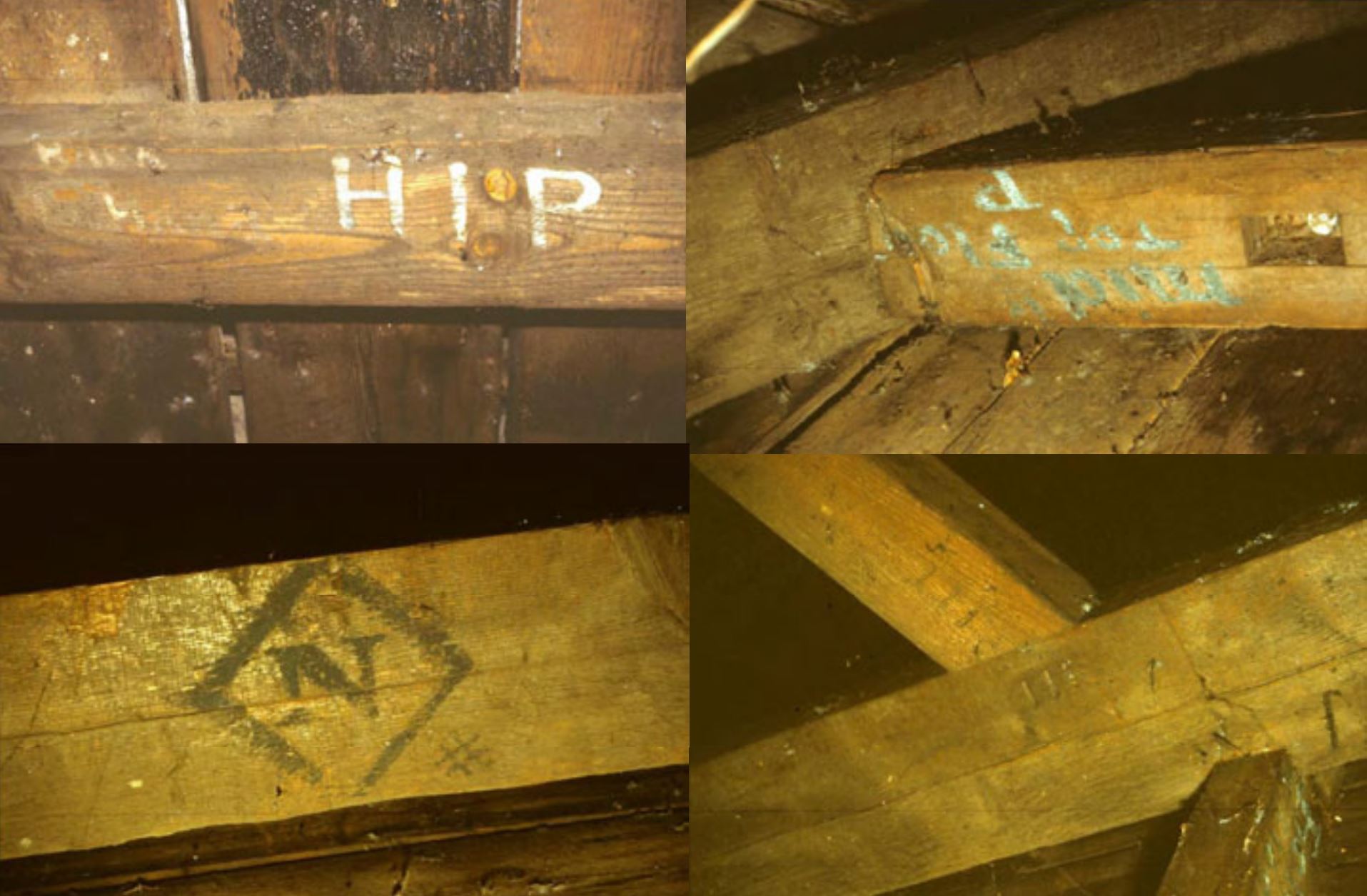 One is marks put onto it by say, a carpenter. A carpenter building a roof frame will cut the margin with a chisel to help with symbols to understand those marks is very useful. You may find lading marks that are their marks put on when the material is exported typically from Britain to Australia in bundles and they put marks on the front of the bundle to indicate which part of the building it is and where it comes from and that can be also a very useful technique. But at the level we're talking about more commonly what you're going to be looking for is things like brands. Brands of course are protected trademarks so they're useful for identifying materials.

The next thing is patents, the patents have equally protected the situation and laws confusing between the British patent system and the what was in the state of Victoria system and the other or the colony of Victoria and the other colonies of Australia, they overlap, but the broad indicators are, if you find a patent number, you can trace the date of that patent and the inventor or the holder of the patent rights.

The next thing you might have is a registered design especially on materials like wallpaper. It's not a technical invention, it's a design and so that is also protected in a similar sort of way and the records of the registered designs which apply to wallpaper, maybe fire grates even other things like crockery and silverware and so on are all kept in Britain and can be traced from those markings.

To take one example, this is a tile from China, now these tiles were gathered by students not in my subject, my students had nothing to do with, so we have no problems they have no real importance so probably, in the end, we'll discard these. They serve to show, what Chinese tiles were like, this is the end of an antefix, the end of rigid tiles coming down to the eve, but they're not objects with any special information about them, other than that.

By contrast, if we take this. This is typical ornamental cast iron and again there's not much of this in the collection, because unless it has markings on it, it doesn't tell us very much. Sometimes on the back you'll find a registration mark or a brand name, all this one tells us is that it was painted in this green colour which is common in iron it was a paint to imitate brass, it would have been a rich bronzy colour which deteriorates to this sort of green but otherwise there's not much information to be got from this.

One man, an engineer, Chris How from Warrnambool has become a nail expert. During the period of this collection he's become more and more of an expert he's now given lectures overseas in Versailles and Denmark and elsewhere and this is the sort of thing he does. He's mounted the nails to show how they fit into the structure, how they're used in different parts of the beams and rafters and so on, so this is not necessarily Australian material but he's done the same sort of work for Australia, which we'll see in due course.

When it comes to wallpapers often the material is in a very poor condition, from a cottage an old cottage often, you'll find many layers of papers, in a big house generally you won't because they've been stripped and replaced, but in the cottage, they're put onto a hessian or canvas on the wall and nobody takes the paper off, they put new layers on so you may get 20 layers and they're very hard to interpret, they're very poor quality paper, not well documented, but you soak them apart and you look for registration marks and other information on the paper. 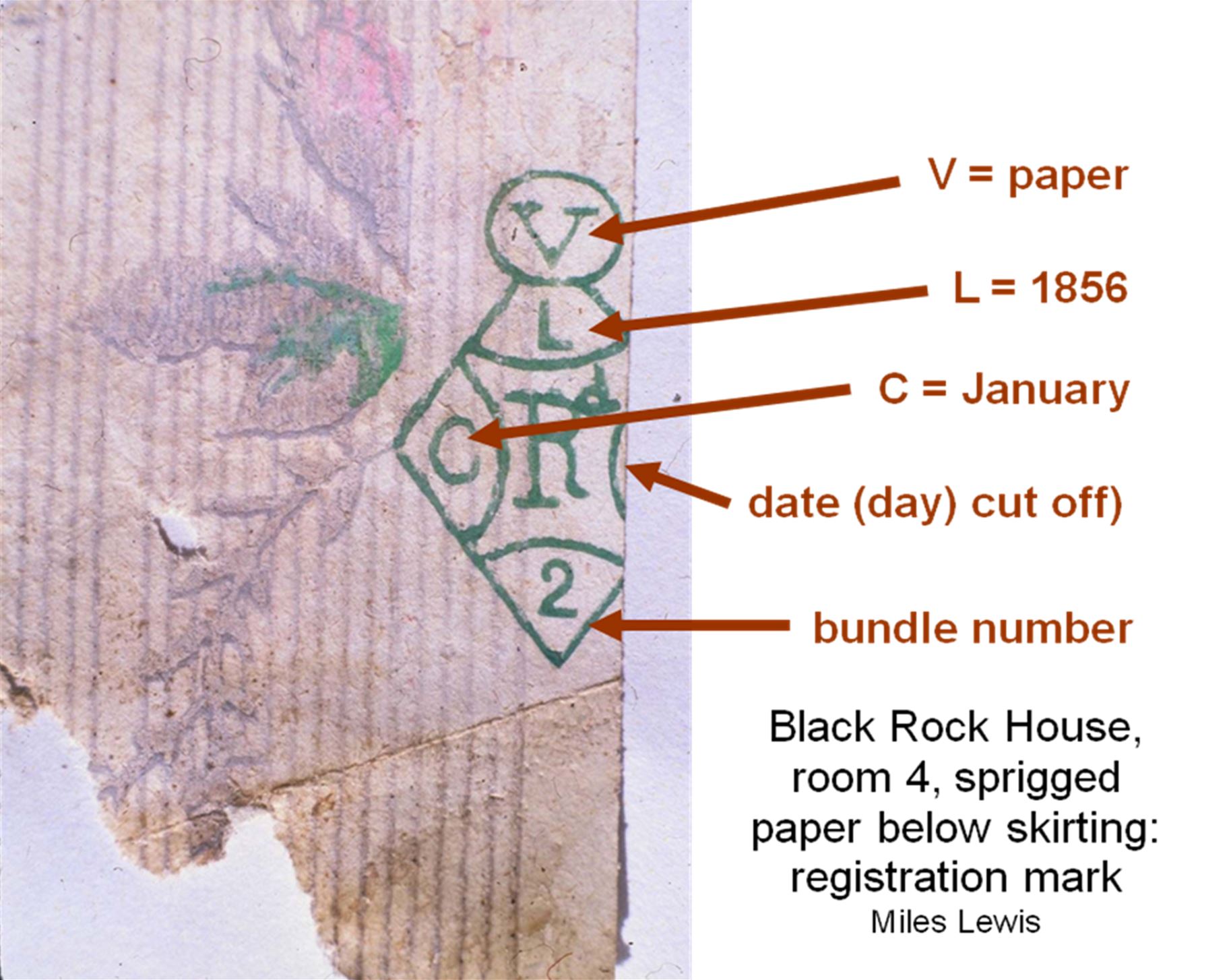 Again for that reason, there's not much in the collection because we haven't got that soaking apart, that's not been done for these papers. This is an example of one which is perhaps a little bit more intact, this is a paper of the 1850s which has been partly hand blocked, that is before modern roller printing. Small children often were employed to stamp things like these flowers and leaves onto the paper. So it's an 1850s wallpaper.

Again this is something I wouldn't usually collect. It's a bit of a skirting, from a house. The reason this was collected is, the house is one which was made in Singapore and sent to Australia in the 1850s, so the timbers are unusual and worth investigating. This was built at first in East Melbourne, it was demolished when the railways were put through East Melbourne, moved to Mentone, became a part of Mentone Grammar and then it was demolished again in the 1980s and acquired and moved to Collingwood. So this is valuable because you can investigate, what timbers were being used in these Singapore houses. This would be probably a Meranti typical Singapore timber.

By the same token this is a part of a concrete building now there's not much to be learned from this because the building is the Bow Truss building in Geelong, now demolished, which is of world importance but the concrete was made from imported British cement. Interesting enough, in the early 20th century although many companies were making cement in Australia there was still prestige attached to these British cements, which were not as good as these Australian ones and certainly not as good as the German ones, so this is just an example of that British cement which we can identify. There aren't many other examples one can find, where you know that it was made from British cement.

5: Section of cast iron veranda frieze, in the design of foliate scrolls. A layer of faded green paint remains on the upper surface.