Manufactured in France and locally, Marseille tiles were widely used in Melbourne.

Tile pressing machinery was developed in France, in Alsace, in the 1840s and the result of that was many tiles were made in more complicated shapes which overlapped to stop the rain being driven in by the wind between the sides or the bases of the of the tiles, 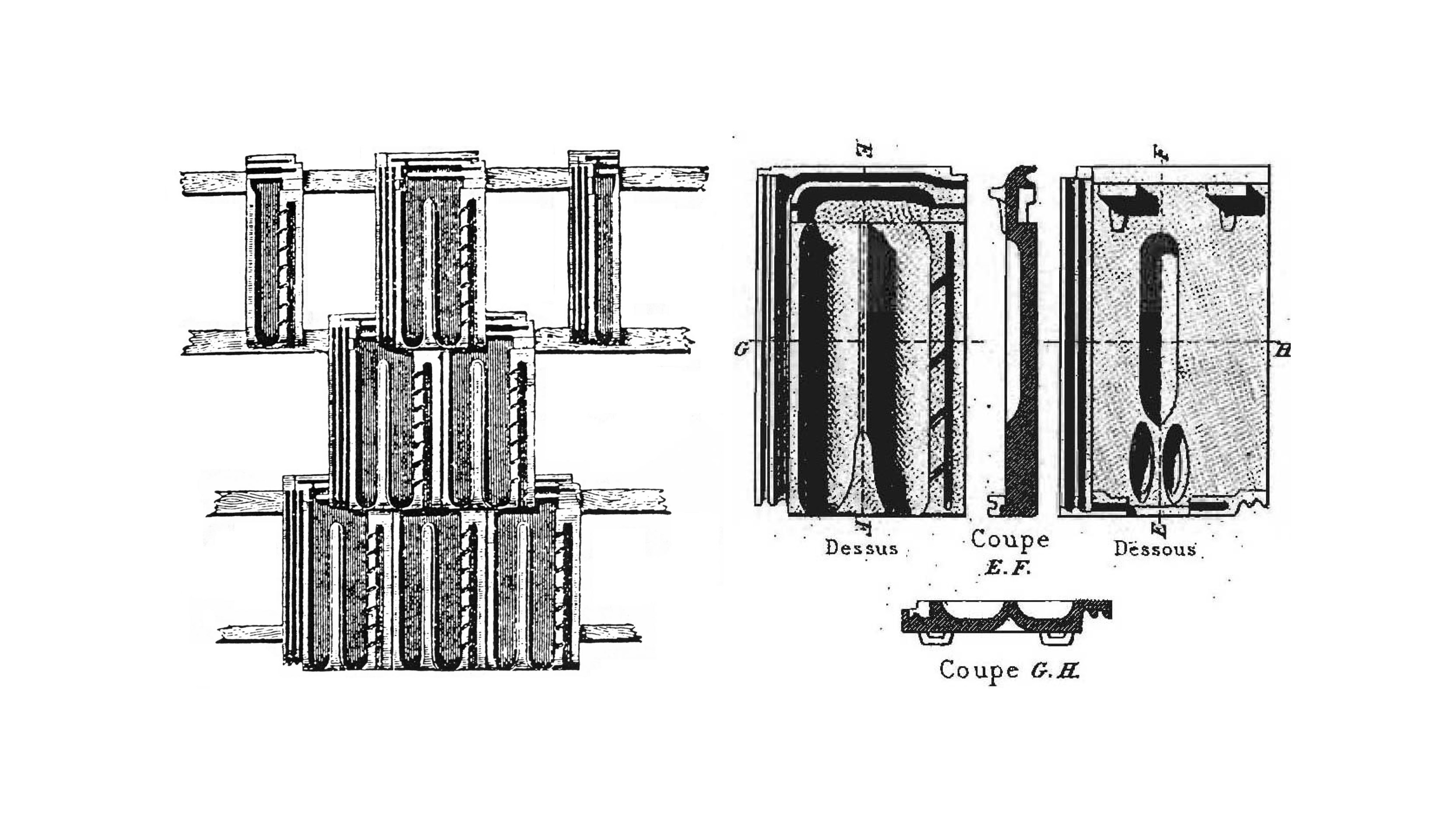 and by the 1850s the Martin brothers them of Marseille were making a type which became very common.

Marseille on the south coast of France was a major exporter of terracotta products all over the world: largest city to French colonies to some extent to South America, India and in due course to Australia, and the pattern which the Martin brothers developed was taken up by a number of manufacturers in Marseilles up to nearly 20 of them, who agreed to make the same pattern and market them jointly. So these are examples of these French tiles first of all looking at the tile you see that it has a double groove on the side which means a very good seal against the weather at the sides and at the end a bullnose which overlaps the other tile and you can see the top where the bullnose fits into the groove here so they produce a very good seal which means you have to have very little overlap into the overlap which makes a roofing material heavy.

Now this particular example is one by made by Pierre Sacoman of Marseille and it has the brand of the star on it which is each make as it's their own special emblem, this one is Antoine Sacoman, another Sacoman and his brand is an anchor which you see here,

and this is a particularly prolific company, the Guichard brothers the Fred Guichard which have a bee as their emblem and this is very widely used in Australia, this particular brand. So by 1888 numbers of these tiles were being imported from Australia, mainly by the Rock company in Melbourne and the Wunderlich company in Sydney and they became accepted as the standard Australian tile and Moore's displaced all the other varieties.

During the early 20th century makers in Australia began to copy them and this is an example this is a broken tile which looks very similar and of course if you wanted to sell a tile in Australia you had to match the size of the existing French tile so Australian makers were literally forced to copy the French pattern but these are not really as well made they're nearly twice as heavy and they're more brittle but they copy the idea and they include similar markings in this case the emblem of a Kangaroo here to show it's a locally made tile.

During World War One French tiles almost dried up the importation French tiles dried up and so Australian-made tiles took over from that time onwards and then they were so popular that the pattern was imitated in other materials like sheet metal cement, although cement tiles having to be cast can’t be nearly as intricate and complicated so there's simplified forms, but the principle is the same and the idea is to try to roughly emulate the impression of the Marseille tile roof which is so popular, the same double groove you can see down the side to stop the water driving it.

This example the Guichard (see above ABP-HBM-4.510 Marseilles pattern roof tile) has to be not only on the the back but on the nose of the tile, when you look at the tire like this, you have the name of the company, you have the emblem, like the bee, but also little marks here which are the batch numbers, from the particular batch of tiles that vary from one tile to the other. The little knob here is a place where there's a hole through which each wire can go to tie the tile onto the roof battens.