Many early roofs in Australia were made of bark and the bark from the stringy bark and box, in particular, could be got off in large sheets for roofing, whereas in most parts of the world you can't get bark in those sizes. So, this is a rather unique Australian practice,

Aboriginal use of Bark 1

and we learned from the Aborigines which trees to use and how to get the bark off the tree and to some extent how to cure it, either putting in saltwater for a time or smoking it over a fire so the sheets can be kept flat.

Bark roofs generally didn't have gutters because the edges were ragged, shingles were a more finished roof,

this is an example of a shingle, which is split from typically, most commonly the box tree using an instrument called a fro, which is driven into the end of the timber and it's produced a very very thin shingle which you can't today get, you can't get timber straight grand enough to produce shingles like that. Now, this would be boxed or stringy bark, say in Victoria, but in other parts of Australia like Western Australia, there'll be different species, this is Casuarina, it just depends on where you are.

In theory, you drive the shingle nail through the shingle and through the baton below because shingles curl up and tend to pull the nails out so you should at least, in theory, find these nails bent over underneath the batten, often that's not the case but they seem to still survive. Now we've only got a small piece of slate here, but slates come in very standard British sizes called things like countesses and so on according to the dimensions.

Underneath your roof stays wherever it might be, you may have insulation, now in primitive Australian buildings often you find seaweed and grass, in fact, seaweed and grass are used right through the 19th century, this is one from an 1850s cottage and the material seems to be some sort of organic material whether it's grass is not quite clear. 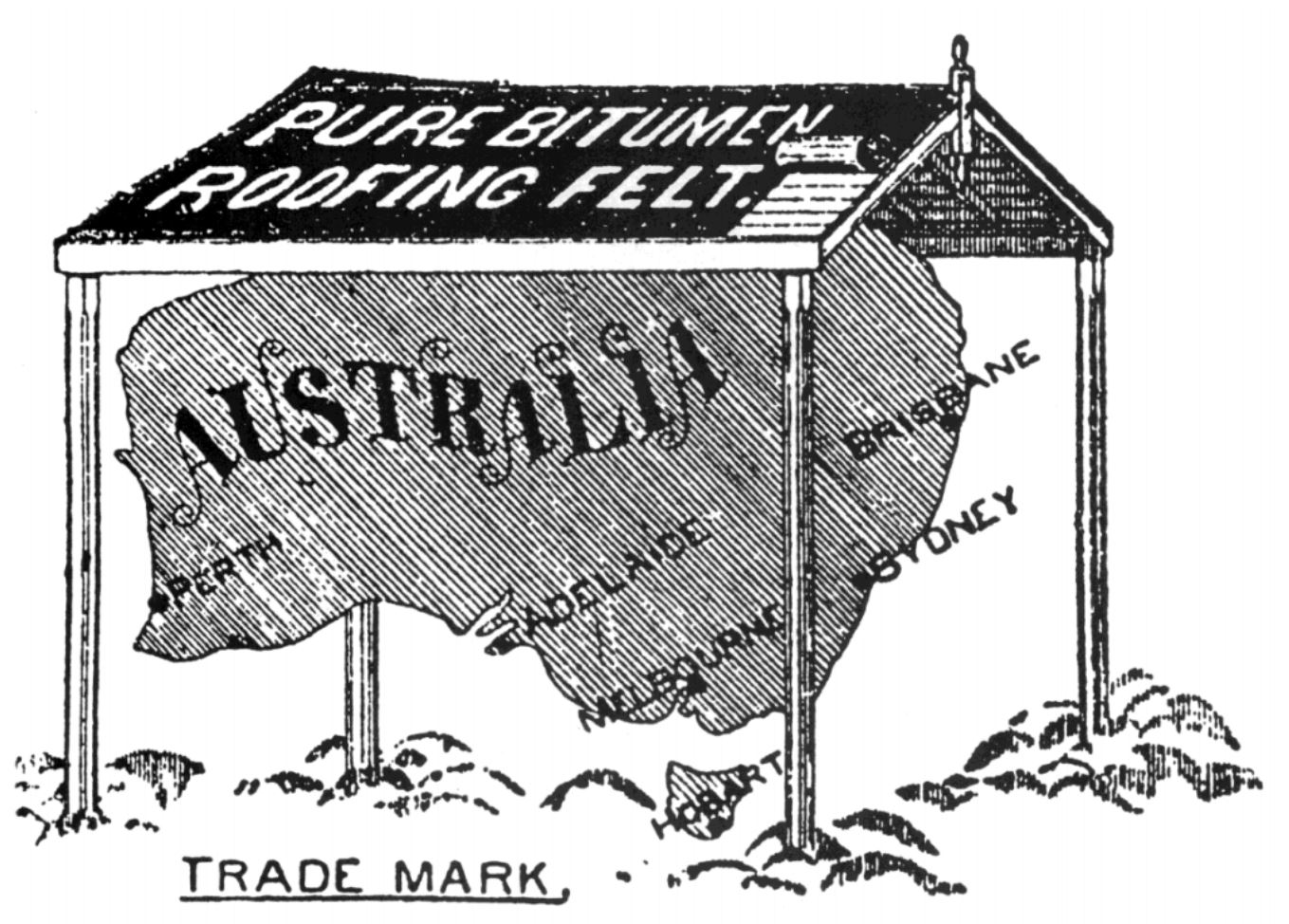 Then you get various forms of felt, this felt is from a Sydney building probably imported from Britain. It's animal hair mostly but it can have bitumen and other materials in it, according to various proprietary or patent systems, and then, this next example is 20th century it's some sort of felt, which has been very much compressed with probably a bitumen in it, to make a thin insulating layer. 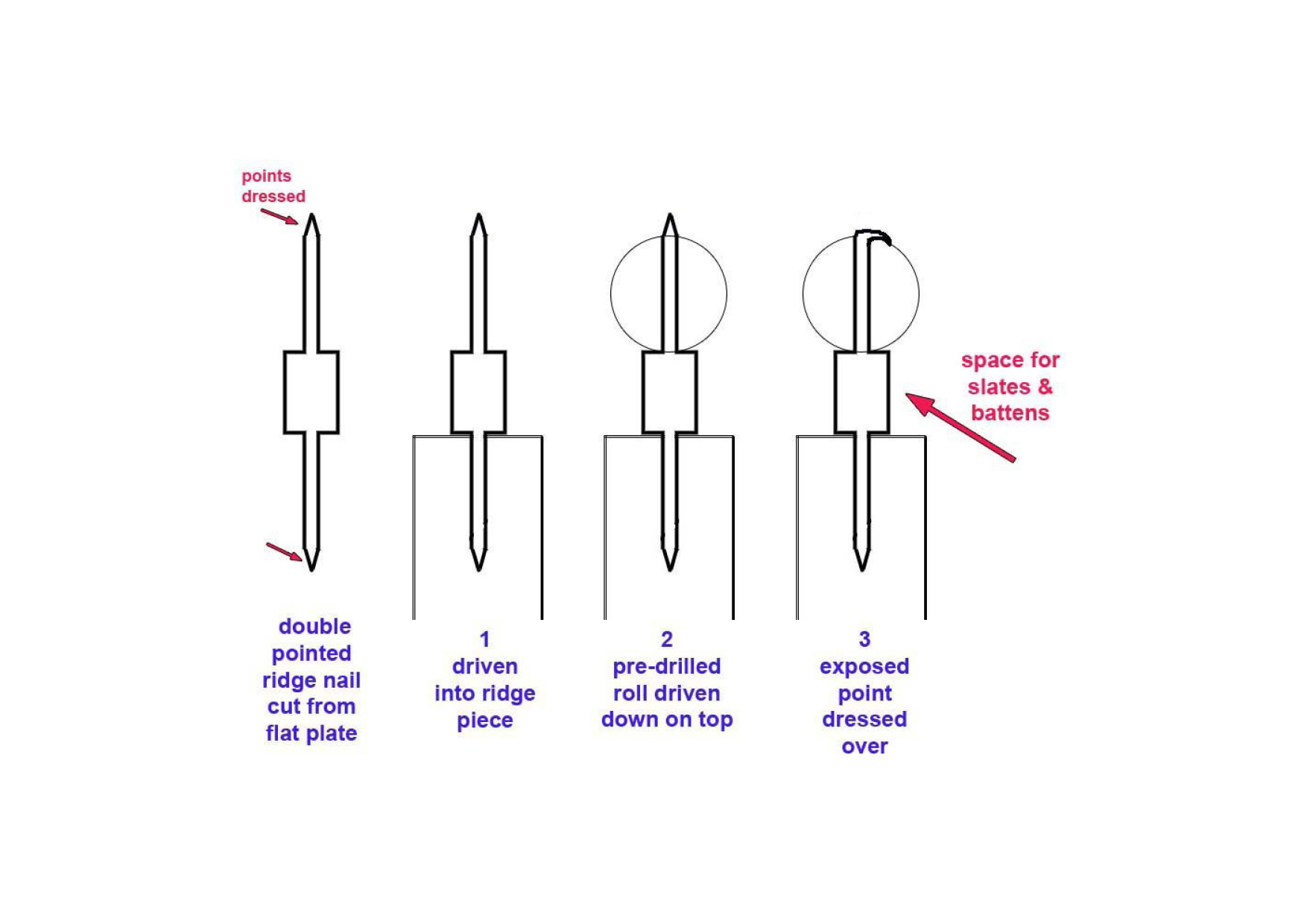 So you have the rafters coming up, a big gap and then you drive this nail, this large spike in between the rafters, so the spike goes into the structure below the width of the rafters is taken up there and on top, this is broken off, but that would curl over like that and you'd bend it over to hold on the ridge roll piece of ridge timber on the top.

That's one version, another version is when you don't allow for the width of the rafters you'll have a bit of the battens only,

so this one here same system but that which is the roots of the battens for the roofing material and then this is bent over on the top to hold the ridge, the roller piece on the same in the same fashion.

Now, the eave of the roof you would not always have a gutter because shingles were thought to make the water taste bad, so often the water wasn't used from a shingle roof but you might have a wooden gutter either by holding out a log of a tree or by building up like splitting up a box timber gutter.

By the 1850s galvanized iron gutters became common and this is an example which at first size is perhaps a little confusing, it has this strange wavy element in the corner this is the corner of the building and those would have been decorative elements they're called ecriteria based upon the ecutary of a greek temple made in terracotta or marble. Now this particular gutter is half round in principle, that is a semi-circular gutter and will be held up by brackets which fit below it, fits into the structure, but when you leave it like that, it may sag out and so you put these pins through it to hold it in place, now this pin passes through the gutter into the structure inside, but to stop you hammering it too far and squashing the gutter, it has a sleeve on, so this sleeve in the pin preserves the width of the gutter to that to that dimension.

This piece of guttering, there are separate sections and they slide into each other and the little metal rods that hold them together, to make them continuous.

That's a large cast-iron gutter. A high-grade building might have a cast iron gutter, which this is an example and these might often have lion's heads on them again, a reference back to classical architecture where lion head gargoyles were used on classical temples.

1: 'View of a hut in New South Wales', drawn by R Clovly, engraved by T Medland, from Arthur Phillip, The Voyage of Governor Phillip to Botany Bay (London 1789)., facing p 119.

5: Use of the Welsh double-ended ridge nail: Miles Lewis

6: Roofing nail for sloped roofs to be added at the ridge

7: Sketch of iron guttering from the prefabricated iron houses in Brunswick Rd