Professor Lewis explains how the individual characteristics of bricks can be used to identify how and when they were made.

The production processes and identification marks for handmade, machine-pressed and extruded bricks are revealed.

The first bricks in Australia were handmade, a small number were brought from England to Sydney. So most bricks in Sydney were made by convicts and some in Tasmania and possibly a few in Victoria, I'll come to that in a moment. A handmade brick is made in a mould which rests on a table; so the mould is on the table, it's filled with clay and then it's scraped off. In this brick you can see slight markings where the scraper has been used across the face to move the top the other side of the brick, the base of it is just against the mould, it's just bedded with a sort of sloppy finish. Now in Sydney that finish would be sandy but in Melbourne it's sloppy. Two different ways of releasing the clay from the mould so it didn't get all stuck up with lumps of clay. Now, this brick has been at some point impressed with the thumbprint, now if you put a thumb into your brick here and it's out of the mould it'll distort the brick so you can tell this thumbprint was put in while it was in the mould. You don't know why it might have been to press the clay into the corner of the mould or it might have been just to mark the work of one brick maker so you could count it. Contrast that with this next brick which is made by a similar process but in this case, the scraping has been done in the lengthwise direction and you can see the long lines across it and if there's a bit of grit or anything like that it gets picked up and dragged across it's like a fingerprint.

In this case on the other side of the brick there are thumbprints in two corners and once again the face of the brick is not distorted so you know these are put on in the mould and if you hold the brick as I am holding it now you can see what happened is to push the brick out of the mould so you've got this open box-like mould, you put your fingers and thumbs in the corner and you push it down and the brick drops out onto the surface of the table. This next one is a similar process of manufacture but it's got very large lumps of grit and stuff in it, a good brick shouldn't have that, this stuff is generally moved out but the same thing has happened two thumbs have been used to push it out of the mould.

Now the brick maker may use his thumbs or his fingers indeed to mark the brick so he can count how many he's done but in many convict bricks, it seems they had a little stamp of their own which is like this one of the heart, they have like playing cards hearts and diamonds and clubs and these are found rarely in Victoria but very commonly in New South Wales and Tasmania. So it's still a handmade brick but it's had this mark stamped on to show which convict made which brick. The stage after that is to have a conventional recess like this which is called a frog. The purpose of the frog is in dispute it's thought to perhaps help a bit in bonding the brick most of all it helps to give space so the mortar can be moved around as you lay the brick into the wall but this is made by putting a bit of wood of this shape on the bottom of the mould so the brick would be this way up in the mould and the kick, as it is called, the wooden bit would be in the bottom and the frog would be formed by that kick so in this case the scraping off would have been done on the smooth face.

The next phase is a pressed brick, those are all handmade bricks, a brick made by a machine that presses the brick.

This here has a frog with a label of the maker and so on and it's also got screw marks, so they've screwed a whole plate of metal onto the base of the mould and they can be changed over, so if you're making fire bricks or cream bricks or some other name you can change the name on the mould. This is a typical late 19th-century example, it has the name of the maker which can't be easily read in there, it also again has the fixing marks of some sort of screw but some sort of fixing rivet or something here which has fixed the plate to the base of the mould.

What I haven't shown you here because we haven't got one here is an extruded brick, some of the most early and simple bricks were squeezed out like clay from a toothpaste tube and then sliced off with wires and they have very crisp edges they have no frogs because they just sliced off from a continuous strip of clay. 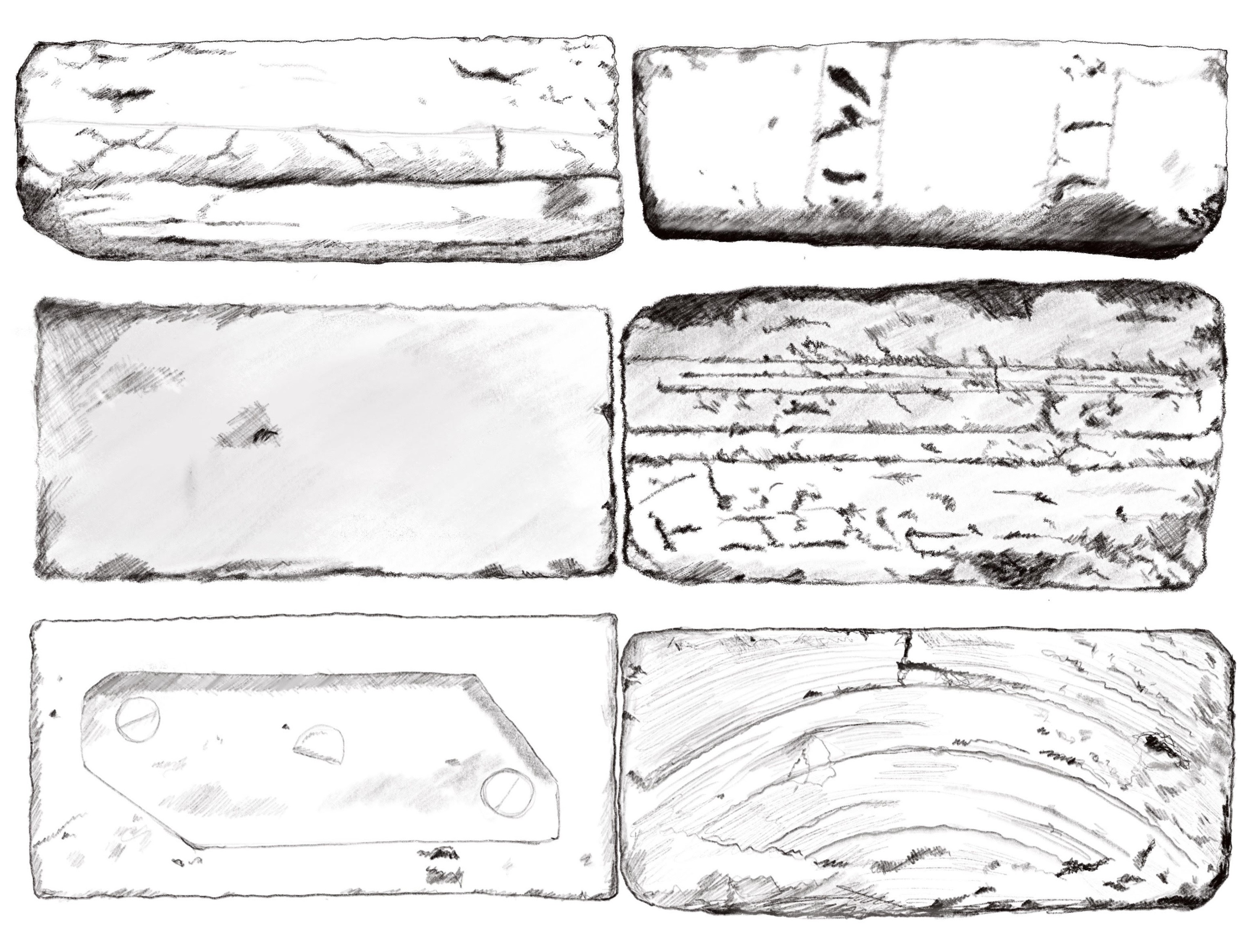 Now when you want to distinguish a handmade brick from a machine-made brick first of all if it's fairly crudely made and if one face has been scraped off, the scrape marks may go lengthwise crosswise or even diagonally and the other face has not got those marks it's going to be a handmade brick. The scraping is done either with a special knife or a piece of wood or even sometimes a wire. If you have a brick with no frog at all and it's very sharp edges and no markings it's an extruded brick which is the lightest and least durable brick but very smart sharp edges. Once you have a frog like this one which has been impressed with very good lettering you can be pretty sure that there's a pressed brick. There are some more characteristics, the handmade brick well often because of the hacking process which I've described will have little markings on the sides where the bricks have been stacked and the clay squeezed slightly because they weren't fully dry before they were put into the pile. There's no reason why that couldn't occur in other bricks but generally speaking, that applies to a handmade brick only.

7. Sketch By Sohan Mitra, inspired by diagram from Gemmell, And So We Graft From Six to Six: The Brickmakers of New South Wales, p 27